Israeli art always draws from world art. The beginning of art in Israel was with artists who immigrated from Europe. Such artists have brought long-standing traditions from countries with an established art culture in general and a portrait painting tradition in particular. One of the interesting aspects of the portrait paintings of European artists is what appears to be a dichotomy between portraits of European Jews and those of Israeli residents, including Jews and Arabs. One of the artists who painted such a portrait was Herman Struck, who created many portrait prints including Herzl's portrait. This print was created during the period when the artist lived in Berlin, and presents a portrait at a 3/4 angle, in an impressive and official prototype format. Even if we do not know who Herzl was it can be seen that this is a portrait showing a well-dressed man, his hair and beard neatly made and he looks at the horizon, radiating seriousness. The style in both dress and format is classic European.

When thinking of a portrait painting in a broader sense as an idea, the essence of a generation can be expressed through a single portrait. This is what Herman Struck describes in another print. This engraving shows a craftsman sitting idle in front of his shop. This is in fact a description of a Jew in exile, his craft is probably the manufacture of copper vessels, a profession common among the Jews in the Diaspora. The shop behind him is dark and he himself is hunched over, his gaze frozen and his hands highlighted in light and highlighted in size as they embrace each other in a sort of gesture of cancellation, as a sign of lack of work. This is a portrait of the exiled Jew, the wretched, the poor, unemployed and without joy of life, hunched over in body and soul, carrying behind him a large black stain that symbolically connects to the persecutions of Jews through history; The pogroms, the social and economic rejection, the class and moral deterioration that the Jews experienced throughout the generations in exile. Contrary to the name of the work which hints at the glorious roots of the chosen people glowing in faith and fulfillment, we look at the portrait of a defeated, lonely and deprived person of any right, glory or self-worth.

Israeli Portrait Paintings in The Spirit of Rrevival

It can be said that the Israeli portrait in the early days of revival presents innovations in relation to the traditional, European and/or exile portrait painting, as the pioneer wanted to be a new man in a new land, different from the exiled, foreign and persecuted Jew. In Israel, the Jews wanted to feel at home, to integrate into the land and to resemble its inhabitants, in their adaptation to the weather, in their demeanor, in their dress, in their independence and in the security of the locals. The pioneer most of all represents the fulfillment of all these.

The young shepherd is a pioneer in Israel, his bulge is a hallmark, his face is young, bright and his head is upright, his gaze is firm and self-assured as indicative of ownership in his home. The values ​​that the pioneers wanted to live by stemmed from opposition to the values ​​of the Jew in exile. The portrait of the Israeli Jew is strong and full of life, his gaze determined and strong. The work of Avni is made with a confident and free hand use of paint; coarse and stormy brush strokes and mixing colors while moving on the canvas. This portrait also seems to be conceptual, it shows the figure almost absorbed in the background, as if to say that the shepherd belongs to his country, the worker owns his land and it belongs to him. Assimilation is a central idea here, the new Jew is no longer a stranger and detached from his surroundings but cut from its landscapes and integrated into national harmony, the colors of the earth and the landscape are his own colors. On the right side of the painting it is difficult to find where the portrait ends and the background begins, as mentioned it should be remembered that there are no coincidences in the painting, the artist expresses in this way the unity of the shepherd with the landscape. 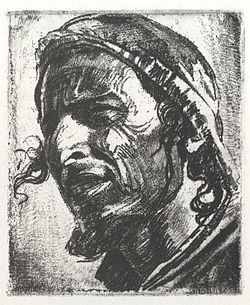 When Jewish artists began to come to Israel and document it, another theme developed in their work: the local type. This portrait is based on photographs taken by the artist Ephraim Moshe Lillian in Israel. The portrait depicts a guy apparently Yemenite while emphasizing his ethnicity in his facial features, hair and head covering. Many Jewish artists who came to Israel in the late 19th and early 20th centuries were exposed for the first time in their lives to oriental types and were fascinated by the difference in their appearance compared to what they knew in their countries of origin. Such portraits were perceived as characteristics and define the scorched landscapes of Israel. There was also an exotic perception, and of course, a colonialist approach to the eastern, dark-skinned foreigner. The portrait depicts a person who is radically different from the portrait of Herzl, for example, the "mummified" in his suit and in the pronunciation. The portrait of the Yemenite boy shows him outside according to his curls fluttering in the wind and not arranged like Herzl's. His face shrinks in response to the glare of the Israeli sun and his mouth is openly distracted, the complete opposite of Herzl's dignified head. The two portraits are engravings but completely different in the appearance of the line: Herzl seems to be drawn in meticulous lines while the figure of the Yemenite looks like a drawing in charcoal, the lines are loose and stained. His gaze is narrow and hidden in silhouette and does not present a deep thought like Herzl's.

Reuven Rubin was one of the first Jewish artists in Israel and he painted a very interesting self-portrait, different from the Jew in exile but also different from a local ethnic portrait. An interpretation has been written that this self-portrait speaks to Jesus, the figure of the ascetic, the tormented, as part of pointing the finger of blame at Christians who have persecuted Jews throughout history. To me, in this portrait you can see many of the things that happened to a Jew when he became an Israeli; The release of European conventions on dress and hair is immediately apparent, the person appearing in the portrait does indeed show asceticism that is not typical of a European official portrait that usually depicts orderly and meticulous dress. The light soft garment is perhaps more in line with the Israeli weather as well as the usual comfort in Israeli company - the opposite of formal, no tie, not ironed, his back is hunched over.

The asceticism beyond the Jesuit image simply corresponds to life in Israel in the 1920s, where pioneers and workers and dreamers left everything in their countries of origin and came to fulfill the vision of the Jewish state. The difficulties are well known, including livelihood, illness and survival in the face of hostile locals. There was not much room for glory in this reality and this portrait excels in illustrating this even in the murky colors, a limited palette for reasons of economy and constraint or a choice to document such a reality, almost monochromatic, gray-yellow. The uniqueness of the self-portrait must be noted; In such a portrait more than any other portrait every detail has meaning, the artist chooses how to present himself and what to hide. His facial expression is intentional and in the portrait of Robin we witness a direct look at the viewer, a look full of sadness and fatigue sent from a bony and yellow face. Tilting the head leads the gaze to the palms that are the second focus in the painting, they are very large and gestures to the viewer. The artist is precise in the position of the fingers in order to say a specific thing, it is possible that the combination of the gloomy look and the gestures of the hands created the association with Jesus, against the background of the general ascetic appearance.

In the 1950s, the Israeli portrait returns to the sources in the sense of a European portrait in a tie and a contemplative look at the horizon. Both the place and the modern period allow much freedom in the description of the portrait; The hand is light on the brush, the colors are laid freely and fluttering, you can for example see in the hair lines the dry color dying at the end of the winding line and in accordance with the curly and unstressed extension of the figure's hair. The hem of the garment is assimilated into the background in a rough and graceful way, in an exciting transition between depicting a realistic portrait and creating a work of art for its own sake. The colors are almost dry at the time of their painting, but there is something frenetic and full of life in this type of work, a feeling of freedom of the artist that may also connect to the personality of Katz painted in the portrait. Power, a man who created a world of culture in the emerging young city Tel Aviv. To my eyes, the primacy and momentum in the Katz's work is embodied in the way his portrait is painted. The mane of hair is also not accidental, bold and hardworking who came to build a world. A world of art in the desert land. His gaze is imbued with power and passion to the vision in his imagination.

In conclusion, the Israeli portrait underwent several incarnations from the time it was born as a descendant of the European portrait until it was connected in its contents and form to the Israeli spirit. With the establishment of the Jewish people back in their land, the artists were released from their cultural duty to the countries of origin and also from the commitment that was the order of the day for the Zionist idea. Later on, more and more freedom in the Israeli portrait was given to present an individual, to gather inside and engage with the private soul in much more personal portrait paintings, which deal with the life of the individual and matters of the heart and are free from laws and patterns.

Send me the photo

I paint for you *

The Painting is sent to you

* At the end of the work, I will send you a photo of the portrait painting and at this point you will be able to request adjustments and corrections.

For More Details and to Order a Portrait Painting: