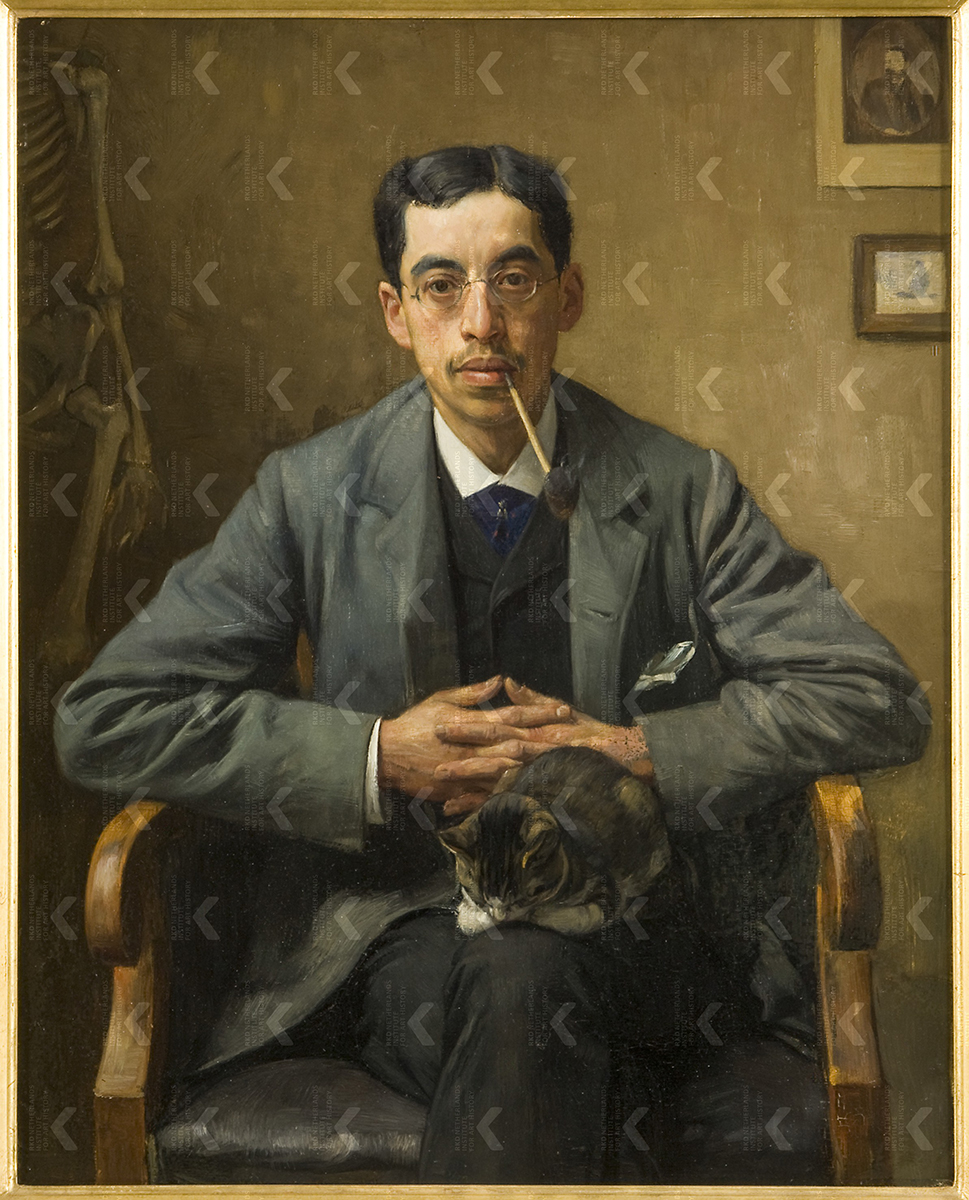 Portrait With a Cat

Cats appear in many paintings throughout history. There are also a few cats in portrait paintings. Since the cat is common all over the world, it has entered many folk traditions, folk tales, mythologies and myths, and has become a multi-dimensional image in parables and emblems. The cat is so common in Dutch culture that it is also found in religious works, in the images of the Holy Family, for example. In the 17th century, the cat appears in masses of Dutch paintings, while the Netherlands are in their cultural and economic golden age, the middle class is emerging and with it Protestant Christianity rises, not to mention a society that becomes secular. Later on, in the Dutch painting, the traditional oil painting developed. In addition, painting at this time is full of humor and symbolism, so every detail embodies content beyond its appearance, therefor we must carefully examine each of such works, in which the cat is sometimes used as a hint for temptation, rolls as a hunter or even hints to a secret in the scene of the painting in order to establish a moral or educational idea.

Later Dutch painting, like modern art in the rest of Western Europe, developed a less didactic and moral attitude and much more personal one. In the 19th century it is possible to find a very personal portrait, in a realistic style in oil paint on canvas. In Jan Veth's painting, a man sits on a wide leather chair with moulded wooden handles. The room is probably a medical clinic or studio, according to the skeleton standing to the left of the painting. Images on the wall and the man's attire attest to a man of culture with a status, a free profession and an education; His hands are clean, his clothes are tailored, he has a pipe in his mouth and a white kerchief is in his pocket. These are classic evidence of status.

But the special detail in the painting is the cat sitting on the man's lap, his head bowed in a drowsy sign of satisfaction and a sense of security. The cat's paws are folded like those of the esteemed gentleman, creating direct contact between the man and the cat. The man appears alert and his gaze is direct to the viewer, his sitting is closed and as stated every detail indicates order and rigor. On the other hand, the cat that is almost entirely in the physical center of the figure may be hinting at the soft lines in the person's personality. While the portrait displays meticulous details in the man's appearance and in the room around, the cat alone remains a natural, round being and, in the Dutch tradition, represents a wild, uncontrollable, naughty and fast element, a hunter, seducer and sometimes a thief. The cat is the only clue to the presence of any loose characters in the personality of the portrait, in contrast to the stern appearance of the other details.

The figure in the painting is Arnold Aletrino (1858-1916), a Dutch physician and criminologist, who wrote about homosexuality as a normal situation and defended the rights of the proud in the Dutch Congress: Jan Veth, Portrait of Arnold Alterino, 1885, oil on canvas, 50x40 cm, The Hague: Letterkundig Museum.

At You Are Art website you can order a portrait with a beloved animal and paintings of different animals according to your heart's liking.