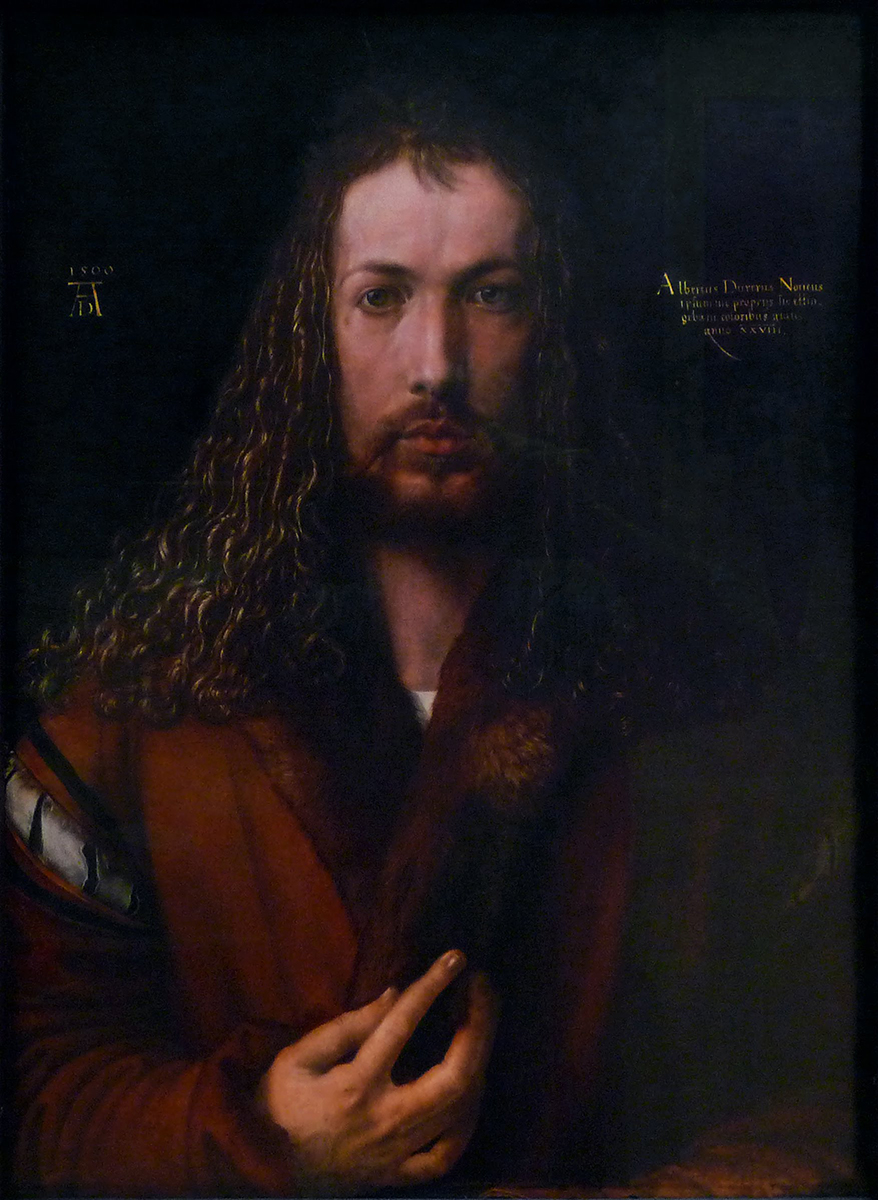 In 1500 Dürer painted his most official self-portrait when he was almost 29 years old, in a frontal format that was customary in Northern Europe only for the figures of the Holy Trinity. In the painting he is wearing a noble fashionable coat that attests to his social status. His hair and beard are bright and brown in contrast to the color of Dürer's light hair in reality. His face is depicted in symmetry and seriousness and presents an ideal of beauty and a clear comparison to the figure of Jesus. He added an antique-style text: "I, Albrecht Dürer of Nuremberg, created myself this way, in timeless colors, at the age of twenty-nine."

Apart from the visual resemblance to Jesus there is also an unusual, deliberate and multifaceted use of the words "creative" and "eternal". Dürer attaches special importance to himself as an artist and creator as well as a model for future artists. In this painting, Dürer presents himself as a "thinking artist," his gaze direct and mesmerizing and testifying to his opinion that the sense of sight is the most important of all. The rigid symmetry alludes to the concept of harmony that appears in the ancient writings and the Italian Renaissance. The painting was displayed at the painter's house and was a testimony to his ability for his clients and also served as an example to his students.

This painting presents Dürer as an icon, his face visible in detail. He appears from the black background and his gaze is fixed on the viewer. His eyes, the windows of the soul, reflect windows that are indeed behind the viewer. His face and right hand form a central axis pointing to his intellectual importance and tools of art. The painting is full of animals but made with calculated care and with an emphasis on heavenly majesty. Dürer was familiar with the Italian interpretation that compares the creative artist to the creator of the world.

Albrecht Dürer was trained by his father to be a jeweler. This early training planted in him the foundations for his individual work and shaped his talent for refined engravings. The hands depicted in portrait paintings are language, presenting an object such as a ring or a weapon or other sign indicative of social status. Thin and refined hands indicate a refined and sublime person. Thin hands testified to a noble-minded man who clung to his faith. Dürer's signature always appears in a form reminiscent of an hourglass and may have meant memento mori as a religious person contemplating doomsday. The presence of the writing and the signature are in fact another portrait in the same frame.

It is a most unusual self-portrait on any scale, a personal highlight in Dürer's career, artistic ability, symbolism and the application of his research on writing and human proportion. This is a particularly prominent performance in the art landscape of his time and the art of portraiture in particular. This painting is a portrait combined with a religious painting and was interpreted as blatant and pretentious by many scholars, although according to other scholars and relying on Dürer's devout Protestant biography, the message is different and stems from worshiping Jesus and a deep religious feeling appropriate to Protestant values. Dürer is a prominent and exceptional artist and an intellectual who surpasses his teachers and other artists of his time.

You can also order a portrait painting on You Are Art website, with spiritual or emotional elements. I am always happy to meet challenges.