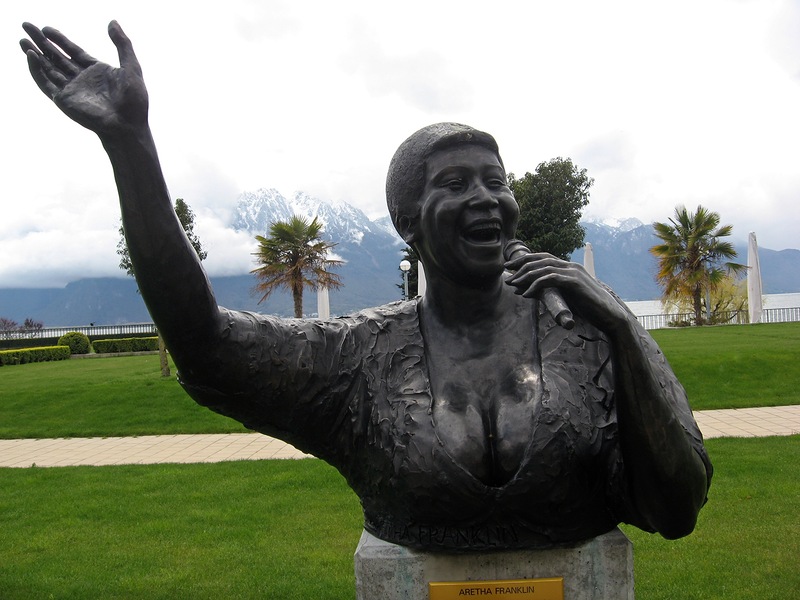 Aretha Franklin - Portrait of a Soul

Today the musical legend Aretha Franklin passed away. The daughter of a Baptist preacher and a pianist and singer, Aretha Franklin was a huge singer who grew up in the church in Detroit. From the gospel songs, Aretha stood out and developed into "The Queen of Soul".

A portrait of Franklin was immortalized in a bronze statue, erected in the garden of the Montreux Palace in Switzerland. The statue shows a torso (chest and head only) in the best tradition of describing warlords and composers who were the greatest of their generation. The outstanding feature of the statue is the long hands and the great movement that is evident despite the minimalist description; the singer is depicted as she sings, her mouth open and her eyes narrowed with a smile. Her head held in short hair, a surprising choice given her many famous performances with big changing wigs. Perhaps the choice represents a moment in her life but I believe it was intended to distil her image out of a bunch of ornaments that stuck to her image in different publications. A small number of details focus the viewer in the large, sweeping voice that, although not given in the sculpture, comes from it with an emotional intensity embedded in the constant underground flow of the gospel and is showed with the raised hand to the right while her head is tilted to hers left hand, holding the mike. The microphone is the attribute representing the transition from the Gospel singing to Soul and Blues music on world stages and in the big studios. The sculptured figure appears with a deep cleavage that also became identified with her character throughout her stage career. Other than that, her figure is free of ornaments, including hair, jewelry and feathers, and of course the colors that characterized her most prominent figure in the 60's, 70's and 80's. What is left of all these are a lush figure, both physical and spiritual, in her open, happy movement, with a reached out hand to heaven through dance and like classical prayer gestures that can be found in the images of ancient worshipers.

As a groundbreaking figure of a woman and a black person in the context of the years of struggles for women's rights and black rights in the United States, the bronze statue seems to mark Franklin's personal and public triumph as a private woman and a public figure, a symbol of feminine power and a great voice that entered a consensus in all segments of American society and Political avenues, and even on an international scale. Piece Details: Marco Zeno, Aretha Franklin, July 2010, bronze statue, Montreux (Switzerland): the gardens of The Montreux Palace.

A good portrait brings a whole personality and not just a face. If you want a special gift for your loved one, a portrait sculpture or a portrait painting is the most original, personal and exciting gift you can give. This powerful gift will be cherished and remembered forever.