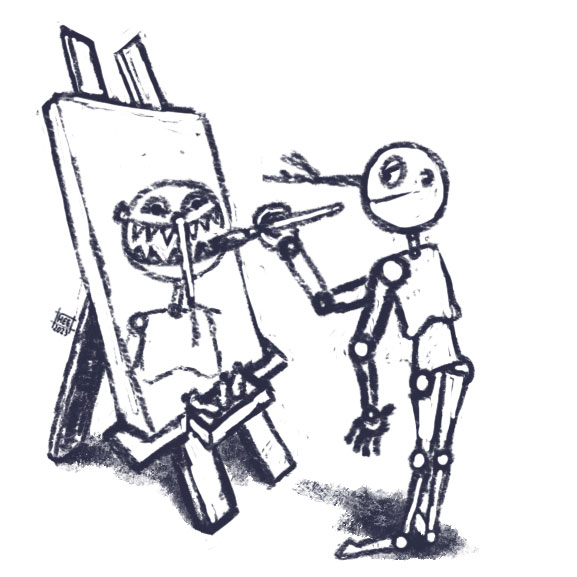 Art in the Age of AI

Throughout human history, technological progress has led to the redundancy of some industries and some workers, while empowering other industries and workers, and increasing competitiveness in the economy. Workers in the manufacturing industries have already been greatly affected by the developments in automation and artificial intelligence and today, the creative sector is the target of artificial intelligence: visual artists, designers, illustrators and creative people are watching with awe and fear the arrival of "Text to Image" artificial intelligence generators. This new technology is undoubtedly sparking a debate around the role of AI in visual art and regarding issues such as style appropriation. The speed and efficiency of AI is causing fear among some artists, while others are embracing it as an exciting new tool.

If artificial intelligence is used to create images, can the final product really be thought of as art? Using an AI tool like DALL-E for example (a "text to image" art generator powered by an algorithm that can be trained to produce the desired visuals), all one has to do in order to create an image is to describe it in text - an instruction, and the software will produce an image that matches the instruction entered. Example of a typical instruction: digital illustration of a pear wearing a cowboy hat, 4k, detailed, fashionable.

In order to create artificial intelligence art, one will usually start by writing an algorithm designed to learn specific aesthetics by analyzing thousands of images taken from different sources. To begin with, a collection of images is selected to feed the algorithm - a step that can be called pre-curating. The algorithm will then try to create new images adhering to the aesthetics it has learned. Most of the artificial intelligence artworks that have appeared over the past few years have used a type of algorithm called generative adversarial networks (GAN). These algorithms are called "adversaries" because they have two sides: one generates random images and the other learns how to judge these images and see which ones best fits the desired output. For example, portait paintings from the last 500 years can be fed into an AI algorithm and the algorithm will then try to mimic those inputs and produce its own variety of images. The operator of the algorithm must sift through the output images and select the ones he wants to use - a sort of treasure hunt. The training process teaches the artificial intelligence to create connections between the visual structure, the composition and any visual data that can be discerned in the image and how it relates to the instruction text. Throughout this process, the algorithm operator is involved in the collection and curation and may adjust the algorithm as needed in order to refine its desired outputs.

The ethics of AI image text generators is a matter of debate. A major issue of concern lies in the fact that the AI tools can be trained using the work of real, living, working artists and this could allow anyone using these tools to create new work in the signature style of the original artists. It should be remembered that the AI images imitate styles and techniques which artists have actually spent many years perfecting. A work of art that is built in on the basis of, or thanks to the work of art of another person or people, whether it is created through AI or in any other way - must compensate the creators whose work was used to train the AI, must obtain the permission of the creators and must give them the credit they deserve. Furthermore, the creators must have the possibility to decide whether their creations will be used in the training of an AI tool.

Eventually AI art is the "art" of sampling. Like DJs and also some rappers, AI programs sample artists' works and hybridize them into a seemingly new creation. Artificial intelligence is about mechanical action without filters or development. This is in contrast to the inspiration which has always existed in art and includes learning, internalizing ideas and their evolution, alongside interpretation, reflection and adaptation. DJs often make profitable collaborations with the original creators of the music they are sampling. They also bring additional value in creating a framework for the sample, in the form of musical interpretation, revision, emotional response or criticism. Compared to this, the sampling which is done by AI art is the lowest imaginable. AI art is in many ways similar to the famous wooden child that did everything to resemble a real child, always by imitating other children. But despite all its desperate efforts, it will always remain a dummy.

Although some aspects of the creative process may be replaced by AI, the critical part of creative decision making can never be replaced by AI technology. Artistic creativity also involves coming up with a concept of what to create, the required materials and the accompanying message that needs to be conveyed to the audience. AI models cannot execute this decision making process alone and create new styles or artistic movements. It is important to understand that something is missing in the artistic process of art-generating AI tools: the algorithm may create attractive images, but it exists in an isolated creative space lacking social context. Human artists, on the other hand, are inspired by people, places and different and diverse mundane and emotional situations and create art to express themselves, their opinion, to tell stories and to understand the world. Just because machines can produce art almost autonomously, that doesn't mean they can replace artists. This means that artists will perhaps have another creative tool at their disposal, one that they can collaborate with: AI art generators will not replace human art but will only complement artists' work, which could allow them to produce better quality works in a shorter amount of time. For example, at the beginning of an illustration project it is always a good idea to create sketches for the client before moving on to creating the final piece. Generating these sketches may prove to be an excellent use case for artificial intelligence tools: instead of spending hours of brainstorming to process various sketches and ideas, an AI generator could be used to quickly generate the raw ideas to present to the client. The versatility of the AI means that one could quickly try many different styles of illustration and sketches without having to create the artwork from scratch each time.

Creating art using artificial intelligence software is actually a conversion from spirit to matter more directly and immediately than ever before. This way frees the creator from the need for many resources that have been required until now: time, materials, knowledge, experience, money, emotional charge, memories, psychological state and certainly other resources that can be imagined when considering the total components of a creative artist. In fact, this new technology enables the existence of an artist who does not create - now it is enough to be an art thinker. Ideas can be translated into creation without the mediation of action. My question as a person who consumes art in different forms, is this mediation worthless? Is there no longer a place for human filtering in the creation of art, in the consumption of art? Generations of philosophical research, art history, literary research are nullified if the basis of these researches is the creative human soul, with all its resources mentioned above. Doesn't a book that contains a stormy emotional experience draw from the author's personal life? from his soul? From his experience? His opinion? And if artificial intelligence wrote it, does the content have the same value? For the reader? And for a researcher? Researchers in their field of study can say that it is not possible to truly understand a work without knowing its creator, the period in which he lived and created, the roots of his life, his biography, his opinions, his soul, even his childhood illnesses. All of these join the creator's resources when he creates and are reflected in his work in some way whether he wants it or not. When we receive an AI creation, all these do not exist. Is it not a rootless synthetic creation? In my opinion, this is a manipulation of the consumer's psyche, with the aim of evoking an emotion in him through a series of buttons that have been proven to be surgically effective. What is the point of investigating such a work? There is no one behind it, no history and no authentic emotion. All these may not be of interest to the average art consumer. But in fact we are witnessing the rise of a production line of industrialized products devoid of nutritional value, whose value is only manipulative, and even if they are extremely enjoyable, they contain no more value to a human being than a packet of margarine. It glides on great, but do you really want to swallow it?