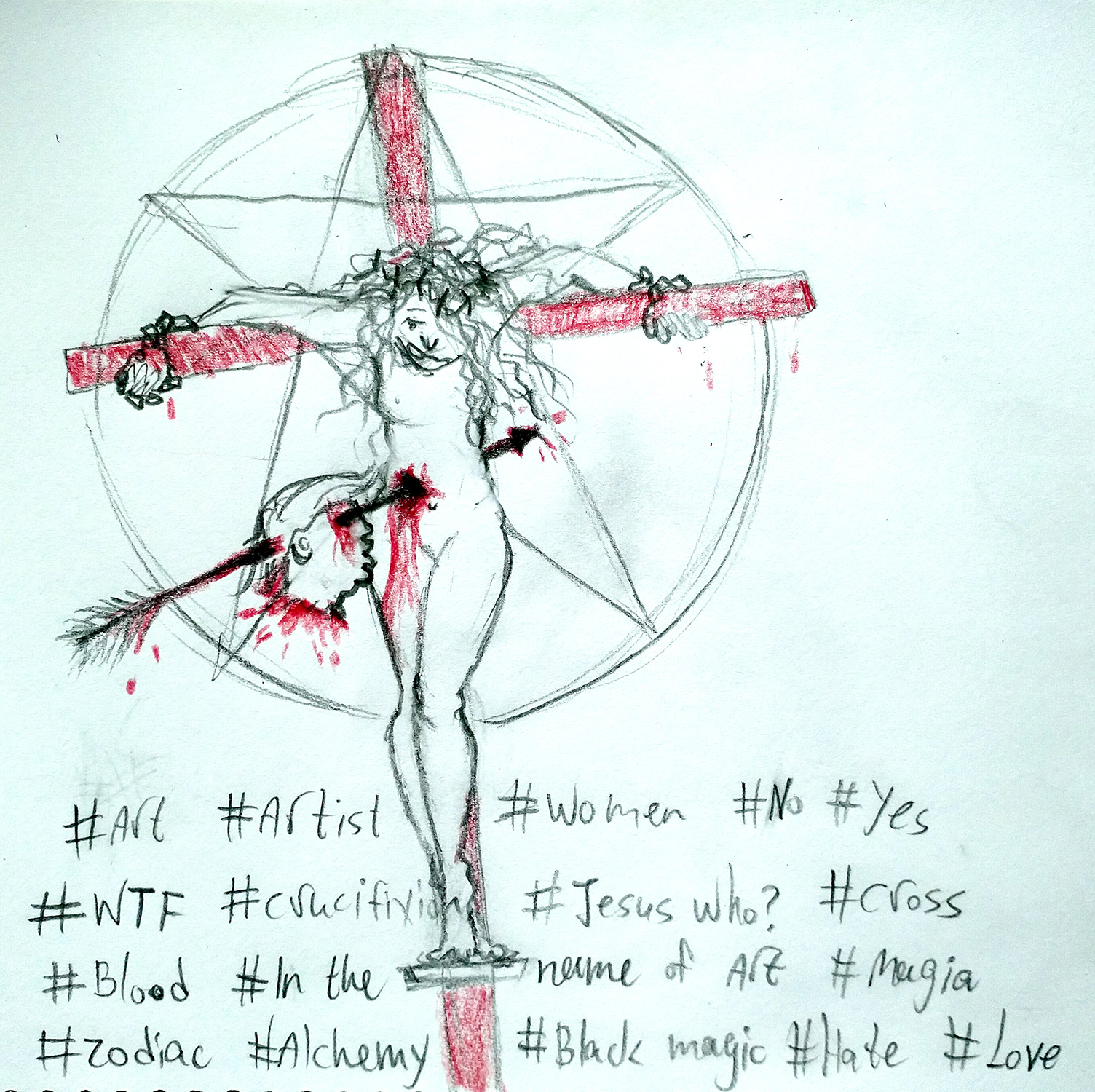 Art in The Name of Art

Making art in the name of art is a privilege!

Throughout most of human history, the artists were craftsmen and art served in various services, for rulers, tycoons, merchants. The art used for religious, ritual, memorial, documentary, publicity, or marriage. The art was made for the journey to eternity for the Pharaohs. The art used as a medium for communicating with the gods and ancient spirits of the ancestors. Art used to distinguish classes at the antiquity and in many ways it is used so today. Over time, art grew and became more and more advanced channels, including design, such as architecture, clothing, tools, spaces, graphics, stage, furniture, media, transportation and more.

Art in the name of art is a new idea in the terms of human history. When art began to disengage from the patron in the 15th century in Europe, in the sense of becoming the artist an intellectual and not just a craftsman, art was still embedded with traditional ideas and definite rules. Knowing the artist's time, place and personal background allowed the viewer to understand the work, the story within it, the symbols, and the message.

During the 19th century, the clear definitions of art began to be broken. Wealthy children could learn and practice art without relying on patronage, and so creative freedom grew, there were no demands to be met and the avant-garde led the camp. The frontiersmen, who sometimes got into trouble with the parents, with the authorities, with society, with the institutions, are the ones who, in retrospect, won the privilege of been remembered and preserved the history of art. The Impressionists, Expressionists, Fauvisists, Pointelists, Cubists, gradually disconnected from the traditions of the past, often irritated the audience and set new ways in the art map.

Among the historical frontiersmen was Picasso, who was born in the late 19th century and who paved the way from the tradition to the avant-garde and back. Picasso, like all reputed artists before practiced art from an early age. He was the son of an artist and art teacher. Picasso studied art methodically and spent his adolescence refining realistic painting skills, according to ancient traditions and decent professionalism, copying masterpieces of the old masters. He excelled in naturalistic painting, but by the second decade of his life he was already experimenting with symbolic painting, evident in the famous Blue Period. He later developed the Cubism and later the Synthetic Cubism. These art streams were avant-garde at their best, groundbreaking attempts, more complicated to understand than his earlier communicative works in the old school style.

But at this point, Picasso's way was paved, he was an esteemed artist who proved himself and easily passed admissions tests for any artistic institution he sought to tread. In addition, he did not need to earn a living because he enjoyed the support of his affluent family and later enjoyed the support of close friends in Paris while living and working there. Picasso was mentally and financially free to experiment and play old-world tools without fear of exploring possibilities and stretching boundaries. There was no real danger in his world, but yes there were clear codes of the old world.

Then, on the one hand, Picasso gets an education and artistic training of the classical world and he mastered the tools and language of traditional art. On the other hand, at an early age, he is given a very great freedom to experiment with any work he wants, but in the pre-Great Wars world, where the codes are still clear. He lived his childhood in Spain and moved to France. The cultural world is vibrant around him but (!) There are clear boundaries that can be breached.

Picasso, as the most famous example of an avant-garde artist, grows from a very, very defined culture, with etiquette, cultural laws and narrow dictionary- terms for every concept, defined classes, distinct countries in every aspect, professional and expert craftsmen, sharp physical and cultural boundaries in every level of life. All of these rules are the ones that challenge the rebellion. Knowledge and practical experience in the creation of all these laws gives him the ability to distinguish between what there is and what there is not. What does it mean in reality and what's missing. From this he experiments topics and techniques that were new to his era. Artistic youth rebellion.

Many artists were influenced by Picasso and creative freedom gained wide presence in all fields of art. The avant-garde grew to envision everything. Throughout the 20th century only the most provocative have left an imprint on the history pages of art. From Marcel Duchamp and his up-sided variable (Fountain), through Malevich and the White Canvas (Suprematist Composition: White on White, 1918), Surrealist and Abstract artists, 1960s pop artists who sometimes seem to just laugh at their viewers, along with Warhol's soup boxes. The Minimalists stripped the art of so many nuances and scrupulously crafted manners for generations, afterwards the conceptual artists, that, in fact, starting in Duchamp in 1917, kicked in all the principles of artistic tradition: the cancellation of the visual quality, since the art is no longer merely visible but carries a greatest idea than visibility. the cancellation of the original (once again here Warhol - his many repeated prints). Abolishing the idea of autonomy- art must now carry a concept, story, topical criticism with a real-world presence. And the saddest cancellation of all in my eyes: eliminating the manual skill. No more artists are required to do Picasso's way of establishing the classical method in any painting or media, to study the great men of the generation and the old masters. The aesthetic becomes a convention similar to a legal contract, dependent on institutional discourse and there is also room or even a demand for criticism from the artist on society, culture, and establishment.(See entry: An introductory course to Modern Art by Prof. Esther Levinger at the University of Haifa).

The camera, which has become ever more widespread and easy to carry, has finally released the creator of any need, technical knowledge, and historical knowledge, cultural or artistic knowledge. Anyone can, anyone creates.

I am as a creator feel the demand of the art world to create something original, yet to be done, that also has no definite audience or, god forbid a paying customer, as it was in the dark days of the patrons and rich churches that have supported generations of artists. On the other hand, the pressure to make a living is heavier than ever. I am an independent artist, a business owner, freelance with receipts. Not enough to get a Corona government grant to the self-employed, but certainly not in the category of salaried employee eligible for unemployment benefits. I make commissioned art. Perhaps "recruited art" can be said. What is considered the worst kind of art today, one done by a customer order. Paying customer. Knowledgeable people argue that this is a shame, because who is the artist who makes a living by making art a factory for dirty and low money. Because an artist who is skilled in his work, it is good for him to starve and eat only on the whims of fashion, institutions, spirit of the time. She must create from the pain of her heart and not the hearts of people who want a painting as a gift, or one that fits the size of the wall in their house.

So what is art and who is an artist? What remains of the spirit of traditional art? Are there rules at all to create by? Are any boundaries left to break?

Now, 2020 and since the end of the 20th century, all that remains to the contemporary artist is to create provocations. Amaze, shock, upset. No more bans, no taboos, all the sacred cows were put on ships for months of maritime expedition, sent to drown in their secretions, dying in agony, to be sadistic abused by blunt hearted workers, to be transported to kosher slaughter, sometimes pirate slaughter, are let bleeding to death with their legs tied up, their heads fall down and they are mooing in horror. Finally, they are served in wonderful plates, in a variety of elegant dishes and under the enchanting titles of creative chefs. These cows' skins are stuffed in huge pools at the margins of the third world, processed with deadly chemicals by starving laborers whose lives have been butchered, in order to produce shoes, belts, bags, armchairs and fancy rugs, plenty of fashionable items for the army of refined and up-to-date buyers. Everything is allowed and no politically correctness is needed. More then that, it is better to kick something, someone, some value, some country, someone important, someone with a lot of followers.

If you have time and money you create a provocation; cover Islands (see entry: Christo and Jean-Claude), tie yourself naked to a memorial monument, slaughtering something or someone in the town square. Quote someone, even copying is fine. Cut and break and reconnect, or don't connect at all, take pictures like this, as it is, ruined, disassembled, scattered, dirty, harsh, naked, bleeding, repulsive, stinky, hurt, raped and murdered, covered with secretion, spiting fire, blind and deaf and shaking and squeaking.

Now write a few words. Add Hashtags. Now bomb it on social networks. With a link, with a tag, with a crush line, with a wink, with a laughing poop, with directing to act, with a link to Insta, with a website link, with a source reference, without any source, with a landing page, with a YouTube video, in the Story, regarding, regardless, with or without logo, business card, business page, private page. Attach details to payments in Get My Payment.