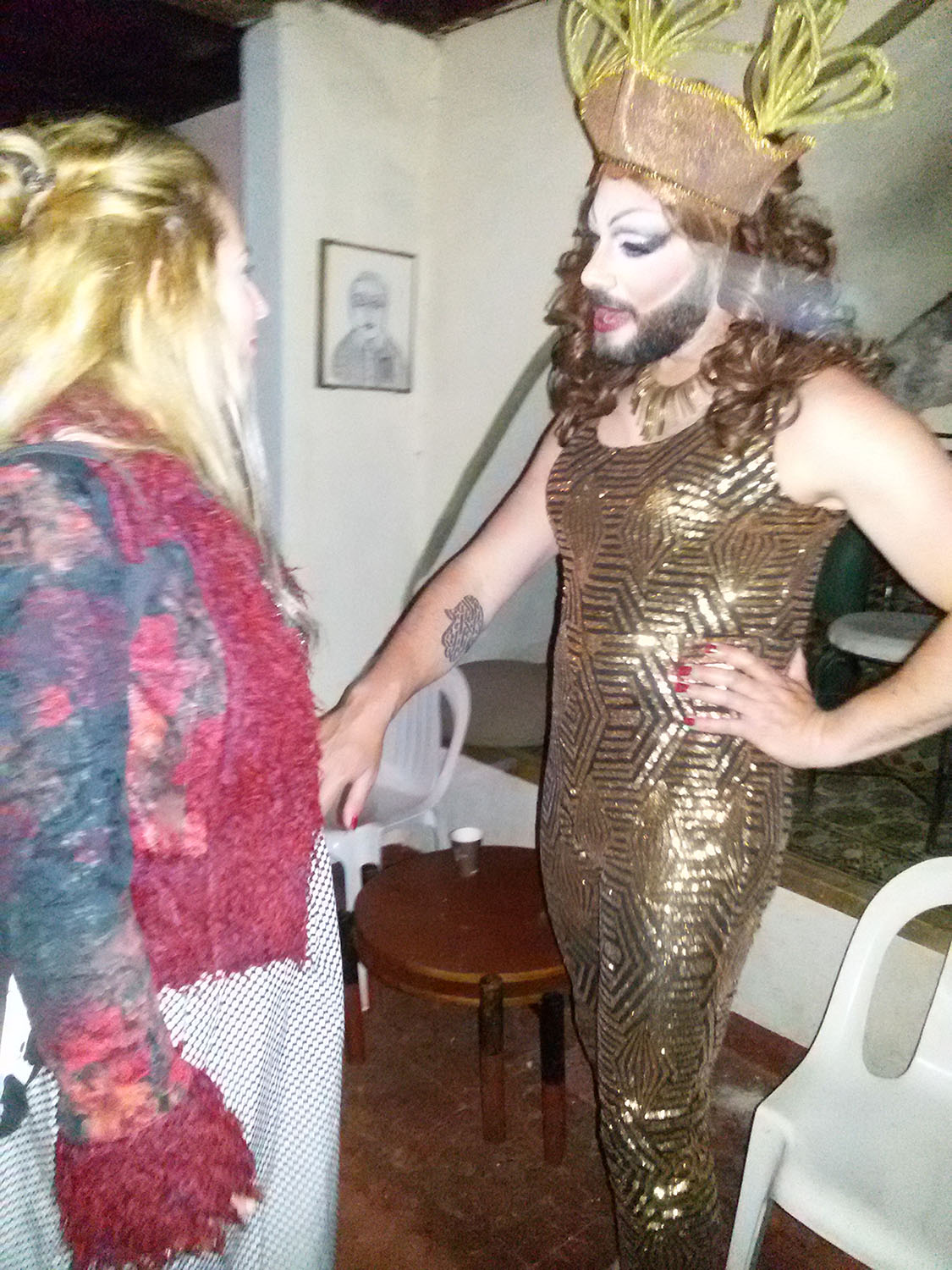 Dress Up or Be Exposed

Does this dress up hide inside someone else? Is dressing up an attempt to impersonate? Perhaps a costume is actually an exposure? A costume can reveal an alter ego that is not allowed to enter the world in the day-to-day circumstances, but a holiday or party can allow it to express itself.

Once I heard a lecture by a costume designer for the theater discussing the difference between costume and outfit, and she emphasized that outfit represents the person in it but costume disguise her/him in another form. So they are opposites. Casual clothing is the most spontaneous appearance, as opposed to an outfit that is often representative, such as a profession uniforms, or a student uniform, army uniforms, or monk uniforms, for example. The outfit comes to represent a clear essence and is invested with great thought, preparations and codes, it is not spontaneous.

In contrast, the costume allows a person to get out of himself and to exist as someone else for several hours and there is a lot of release and charm. That's why many people enjoy it and that the Burning Man Festival and others like it thrive on their costumes.

One of the areas where the difference is blurred is the drag world, in which men masquerade as women in carnival performances and provocative tendencies. These men are called drag-queens and there are also more and more drag-kings, which are women who appear as men. Recently I was in a "Drag in the Living Room" show at the Gallery House in Haifa where one of the performers said that their costumes are sometimes just a personal clothing style. The performer who talked about it in the show claimed that they actually do not dress up as someone else, but dresse according to their real self. Drag queens usually do not live in women's clothing, and only in the entertainment shows do they become women. Nevertheless, it has been argued that the feminine appearance is an approach to the self of the performer. This is even more surprising considering the exaggerated, daring and operatic appearance that no woman will ever consider wearing.

In my understanding, this is a personal statement regarding the alter ego, which has no place in daily life in the average society, whose shades are mainly grey, and political correctness is constitutional. In blatant contrast, drag shows are not polite, refined, or bent to gender laws. The exaggerated, funny, or overly exposed character is an alter ego that is silenced and strangled in the daily lives of these performers, and the men and the minority of women are interested in testing the boundaries and experimenting with the persona opposite to their usual.

For those who have not tried, it should be noted that in the drag show sexual comments are often thrown into the air, and the performers tend to exaggerate in their bare clothing and also emphasize contrasts and extreme lines. For example, a gnarled man will appear in a shiny evening dress and a push-up bra, stiletto heels and grandiose makeup. A tall, muscular guy will adopt a feminine and abundant figure. A beautiful, gentle girl wears a beard. These people choose to live a normative and solid life in the day, and in the evening to explode in a completely opposite figure, usually colorful and flirtatious.

Out of affection for the field and curiosity, a few years ago, I experienced a masculine costume myself and also added beard and chest hair. It was not easy to disguise my rotund structure, and I had to dress wide and sloppy, which was appeared as a not very esthetic but convincing man, and I was not really noticed most of the time. I expected to be comfortably assimilated in the background, but in the end I felt too ugly.

On a more optimistic note, in the RuPaul's Drag Race, a reality show that is all drag, there is a great opportunity to get to know the field, see the hard work and hear the stories behind the characters. So far I have seen gay men who live as men of pretty solid appearance and insist that drag is entertainment for per se, and only on stage they become women. They work hard to give themselves rounded, feminine features and develop different skills, including sewing, makeup, hair styling, and a wealth of colorful invention. This is a real art.

These people are artists. Beyond performances on stage that bring talent to play, dance and sing, they design for themselves an alter ego figure, which has a fixed stage name and is published only in its name. One of the criteria for a successful drag queen in their eyes is the level of femininity they manage to adopt, through the blurring of the male crotch, the upholstery of the thighs and chest, and a lot of hard work and practice of female body language, including walking, hand movements, intonation and feminine talk. This special dialect called Ohchit was born and developed out of the gay community and has already become a real language, which is not always easy to understand from the outside and even won its own research in the Department of Language at the University of Haifa. I suppose every country has its own gay dialect.

Finally, when you think about it, the costume of drag is the tip of the glacier of an entire world that coexists with that visible one. A world that comes out of the closet only in entertainment, but actually takes place in the private homes of many artisans who work in the craft, an entire world that is the alter ego of a community that dreams and designs, invents and sews, writes and dramatizes, buys countless glamorous, sexy and funny items and wigs. Many of these artists nurture gentle hands with well-groomed nails and most of them also maintain a shapely body.

The novelty of recent years in the field is the drag queens who do not try to convince that they are 100% women and go onstage with female body and a beard. A breakthrough on this subject is the singer Conchita Wurst followed by many good drag queens. So that the boundaries are stretched even further and prove that in art everything is possible and the costume can hide just as it can reveal.

In the picture is the Mother-Drag-Queen of the north Zohara Platinum.