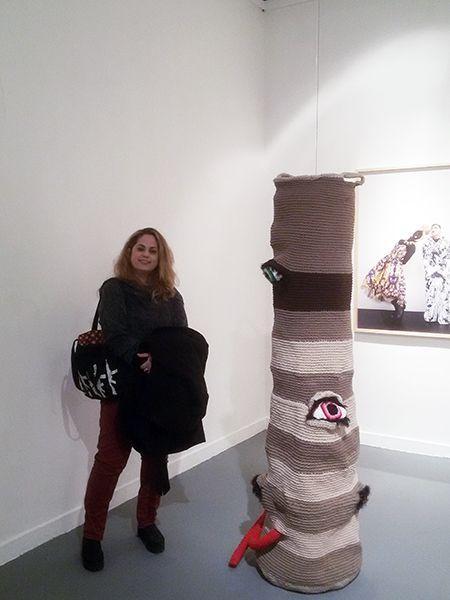 About a week and a half ago, the Haifa Museum of Art produced an event called Factory #4 // Dangerous Art.

The evening consisted of a variety of performances by various performance artists. The performances took place in the museum spaces on the various floors and against the background of the exhibitions currently on display there. In one of the spaces, in addition to the display on the walls, were also placed the works of the "Cochinta" collective members, who create installations in crocheted knitting. Their exhibits stood on the floor and were most impressive. The members of the collective are African women survivors of the Sinai torture camps of Bedouin smugglers (as explained on the museum's website). The women created in collaboration with artist Gil Yifman.

The charm in the exhibits is mostly from the unpretentious work in the technique of traditional, feminine, soft and warm handiwork. The knitting action is meditative out of being repetitive, but it allows for endless creativity in sensual materials for touch and the eye. Yifman brought another facet, humor - a spice that is expressed in his knitted installation, resembling a tribal totem with colorful eyes.

The installation brings the ethnic touch of the knitting work, which is ancient and belongs to a slow world, but the cheerful eyes sent me straight to the restless contemporary art, to the fast-paced world, where images replace words. Yifman seems to awaken the sleepy old world of women's work, not to mention that their work, allows for a connection to the vital highway of images that swarms around us. The crocheted eyes try to get out into this world, a shiny and fast world - inviting voyeurism and unquenchable curiosity.