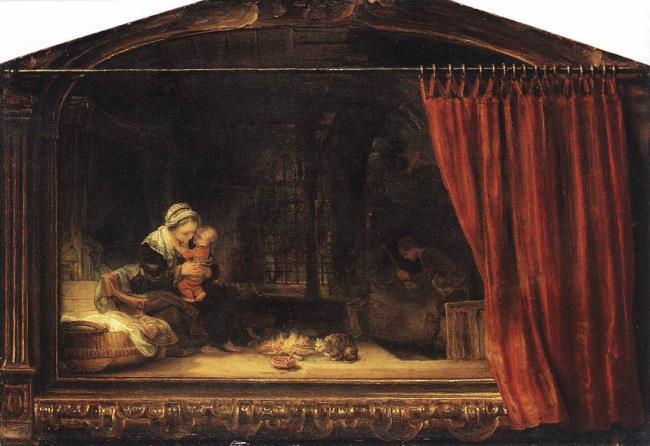 Portrait of The Holy Family and More - Christian Holidays

In December, most of the Christian holidays are celebrated, which we are all very aware of, mainly due to the glittering shopping festivities that are celebrated everywhere. The internet is bursting with holiday promotions and photos in red-green-white, Santa Claus and fir tree icons and other holiday and party items.

But beyond these extroverted characterizations promoted by advertising companies and promotional businesses. The holiday, what the Christian tradition celebrates as the birth of the Christian Saviour, or if you prefer Jesus, the Son of God.

The story of Jesus' miraculous birth is from the foundations of the Christian faith. It all begins in the Gospel of Luc, in which an angel is sent to Mary to announce her that she will give birth to the Son of God. Mary, a virgin, was then engaged to Joseph the carpenter, who, inspired by divine knowledge understood the holiness of the pregnancy. He played a major role as Mary’s husband and as father of the divine child. In theological terms, it is said that the Word fulfilled in the flesh.

Thus, the Holy Family appears in Western art in many works throughout Christian history. The family core as mentioned includes Mary, Joseph and Jesus. They are portrayed according to the period, the fashion and the faith, sometimes according to the church that commissioned the work, sometimes together with the patron figure, wearing contemporary garments and surrounded by description of a contemporary house as requested by the client. Many times the Holy Family appears in a modest carpenter's house, with descriptions of his workshop and working tools. Many times other characters appear in the work, including St. John, usually slightly older than Jesus, sometimes accompanied by his holy mother as well. The accompanying characters are varied and play symbolic roles like other elements in the Dutch art, depending on the period and place.

During the Dutch Golden Age in the 17th century, many religious Dutch works were created alongside secular ones, when, for the first time in history, secular or at least Protestant art was legitimized. The religious works are unique to the Netherlands at that time by meanings of presenting scenes and figures very different from traditional religious images and many resemble secular ones. These images depict Dutch day-to-day life and it’s a little bit of a riddle to identify the sacred characters and the historical moments.

Such images contain symbolic elements, which are a characterization of Dutch art at the time. The works require concentration and long observation to identify all the details and to decipher their meaning. Such religious images depict the holy family with the same soft look typical of the spirit of the time and the region; Human figures in the warmth of the home show harmony and love. Such homes often feature a cat that participates in family life. It seems surprising and unrelated, and much more suited to secular oeuvres. Indeed, the cat often appears in the secular Dutch paintings and holds different meanings that fall into several categories. The cat, like other elements in Dutch painting, is always a hint of something beyond it. In most of these paintings, it is a moral lesson, a secret, or cautious of shameful human behaviors.

We know the lamb that appears many times with the Holy Family and in many pieces a lamb appears instead of Jesus himself. A lamb or a sheep is the symbol of Jesus everywhere that appears; the eternal innocent sacrificial symbol and representation of God being the shepherd of the believers. He is both God and human, similar to the flock by its earthly nature and a lightning rod for all the sins of mankind.

In contrast, the cat in the Holy Family pictures is particularly mysterious. The cat is never a symbol of holiness. Also, within the holy family home there is certainly no moral criticism, no embarrassing secret and certainly no parable for human disgrace. If so, what does the cat mean?

In order to answer this question we have to understand that beyond the Dutch artist's attempt to transform the sacred family into a Dutch family and therefore vice versa, the cat seems to represent something from the material world. The cat in historical writings and pieces from antiquity to the 17th century represents varying values like birth, hunting, many times is a representation of sex and a treacherous man. At other times, the cat was a mascot as the grain protector for farmers and the ship's protector for sailors. The cat is considered a natural pest’ exterminator, but also was an ancestral representation of the fertility goddess, those who guard babies and mothers. The cat was considered a devoted mother who cares for her cubs, nurses and protects them with self-abnegation.

So, when a sleeping cat shows with the Dutch holy family, it probably represents the sleep of the earthly urges in the holy lap. A cat sitting quietly next to a bird or dog is similar to the vision of "The wolf will live with the lamb, and the leopard will lie down with the goat…" (Book of Ezekiel), and signifying a heavenly peace at the end of the days. But the cat alone with the holy family is a mystery.

This cat, which sometimes rests near a bowl of food and usually near the fire, apparently signifies the client earthly needs alongside the rule of family values, including toddler care, warm food, lit fireplace, loyalty, love and security. Cats are very fond of heat and have not accidentally developed a tradition of living together with humans. In the Holy Family home there is no hunting, no sin and no suffering. This home is warm and nourishing, pampering and comforting as is the belief in the heart of the good Christian.