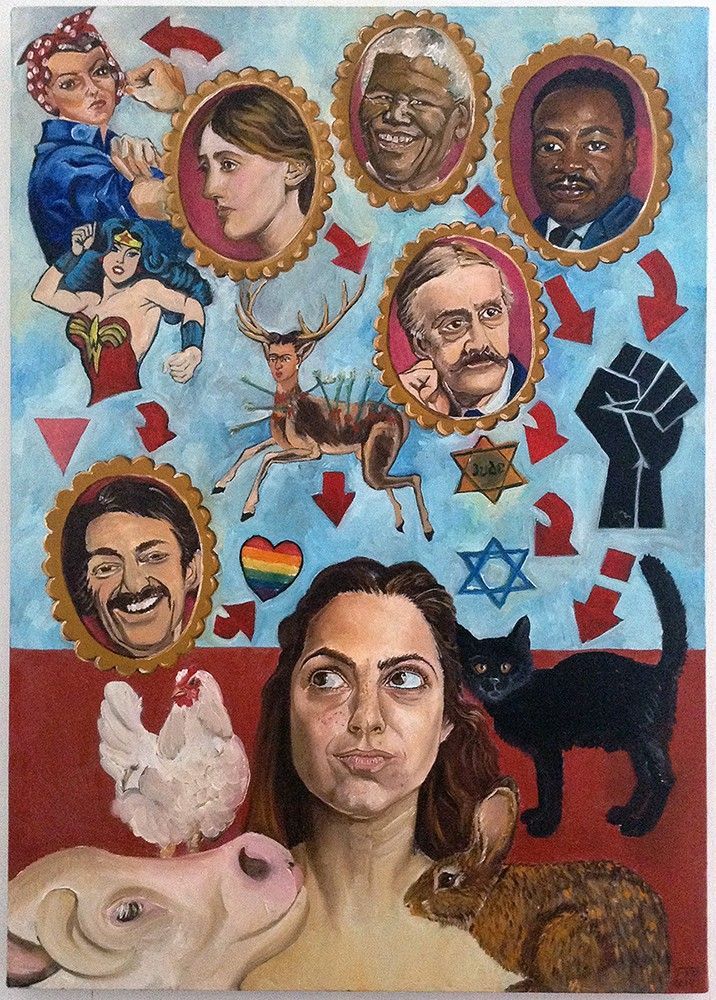 The Artist as A Shaman

As an artist who specializes in portraits paintings, I receive orders from different people who send me a photo. These people find me in different ways and most of them are of course total strangers to me. Although the ideal situation for portrait painting is sitting for a long time without moving in front of me during painting and preferably in several meetings, because such a living painting provides the most details required to create a vivid portrait, faithful to the original colors and expressions. But since today's postmodern world (or pre-apocalyptic if you like) does not allow such a long sitting for a portrait, we make do with a photo or a few photographs.

The difficulties associated with working with photography begin with identifying the color of the eyes that can be very misleading in photography, continuing with the variable and specific light for the time and location of the photograph. Apart from these, the expressions sometimes are not natural and/or are not typical of a person in photography and many times his photographic portrait is very different from its appearance in reality. Since I usually get a photo on WhatsApp or an email, I do not know the difference between photography and reality, these are people who are unknown to me and we usually do not meet. Painting is usually a gift to a third party and sometimes describes a portrait of a person who is no longer alive, so that there may be some gap between painting and reality.

Despite this indirect connection between me and the figure in the portrait, when I work on painting I actually invest many hours and days with the same person, since painting realistic portrait requires concentrating on his face and tracing every detail inside, in shades and details, including hairstyle, clothing, jewelry if there is, objects that appear with him in the photograph, other people beside him and of course the background that appears in the photograph.

All these details are clues to me about the person I paint, who tell me who he/she is and without knowing I find myself thinking more and more about that person, her / his actions, hobbies, profession, personality. The many hours of work on painting a portrait bring me back to reflect on circles about that person in an almost uncontrollable and almost ritualistic way.

This meditative state of creation and contemplation is one in which a shaman, who deals with the connection of matter with the spirit, is similar to me. Shman is an idea already discussed by art historians, as I discovered when I wrote my thesis on the subject of Caravaggio's Ceiling in Villa Ludovici and the Subject of Alchemy in his Work; Lorenzo Pericolo published a text in 2011 saying in free translation: "The artist revives the act as a shaman and directs its emotional content through his story, and his psychological force - a byproduct of his painting - if properly transferred, moves the viewer through empathic symbiosis. The observer feels and experience exactly what the artist saw, felt and experienced.”

“The shamanic idea of emulation belongs not only to the field of alchemy and medicine, from which the painter and theorist Gian Paolo Lomazzo (1538-1592) adopted it as rhetoric, poetry and theology. The purpose of this art is to reveal the divine truth for the believer ... The painter invites the viewer to see his vision; his fictitious truth ... far from the embodiment of truth, the story is the point of view and the eye of the painter through which the viewer looks at the scene, proves that it is an invention seen through the lenses of the creator, and directed into a fictional realm of painting." *

Although this text was written in the context of Caravaggio who was an artist in the service of the Catholic Church and his work was intended to strike the hearts of the Christian public, the artist's perception as a spiritual or emotional mediator is validated to me throughout the long hours of observing the portrait photograph while painting. In every portrait I feel that I have to crack some puzzle and overcome some tangled connection that encloses the personality of the character, and only then can I finish the portrait in a way that displays the person's personality and not just his face. Only then does the whole portrait come to pass.

This cracking during creation is the core of my shaman's work.